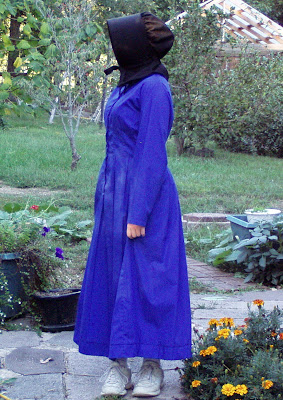 I'll give you a bit of history about this subject in order for you to grasp our familiarity with the Amish community.  We live next to six large, Old Order Amish communities.  We spend a lot of time with several different Amish families and have made some great friends.  Our daughters play together.  This picture is of our daughter (which explains the white tennis shoes) trying on one of their dresses.  She absolutely loves these dresses.  Trying to make one of these dresses isn't because we feel she needs to wear these dresses, however, they

Can you sleep when the wind blows?

Years ago, a farmer owned land along the Atlantic seacoast.  He constantly advertised for hired hands. Most people were reluctant to work on farms along the Atlantic.  They dreaded the awful storms that raged across the Atlantic, wreaking havoc on the buildings and crops.  As the farmer interviewed applicants for the job, he received a steady stream of refusals.
Finally, a short, thin man, well past middle age, approached the farmer. 'Are you a good farm hand?' the farmer asked him. 'Well, I can sleep when the wind blows,' answered the little man.
Although puzzled by this answer, the farmer, desperate for help, hired him. The little man worked well around the farm, busy from dawn to dusk, and the farmer felt satisfied with the man's work.
Then one night the wind howled loudly in from offshore.  Jumping out of bed, the farmer grabbed a lantern and rushed next door to the hired hand's sleeping quarters. He shook the little man and yelled, 'Get up! A storm is coming!  Tie things down before they blow away!'  The little man rolled over in bed and said firmly, 'No sir. I told you, I can sleep when the wind blows.'
Enraged by the response, the farmer was tempted to fire him on the spot. Instead, he hurried outside to prepare for the storm.  To his amazement, he discovered that all of the haystacks had been covered with tarpaulins.  The cows were in the barn, the chickens were in the coops, and the doors were barred.  The shutters were tightly secured. Everything was tied down.
Nothing could blow away. The farmer then understood what his hired hand meant, so he returned to his bed to also sleep while  The wind blew.
MORAL OF THIS STORY
When you're prepared, spiritually, mentally, and physically, you have nothing to fear. Can you sleep when the wind blows through your life?  The hired hand in the story was able to sleep because he had secured the farm against the storm.  We secure ourselves against the storms of life by grounding ourselves in the Word of God.
We don't need to understand, we just need to hold
His hand to have peace in the middle of storms.
This story is one that caught my attention a long time ago.  It's one of those that sticks in my mind when I try to take short cuts or procrastinate......I like my sleep, so things get put up and tied down, life is prepared for......prayers are prayed,  soft quiet moments are taken with my husband and children, we are grateful for the simpler things in life and we sleep very well.

"The woman who makes a sweet, beautiful home, filling it with love and prayer and purity, is doing something better than anything else her hands could find to do beneath the skies. A true mother is one of the holiest secrets of home happiness. God sends many beautiful things to this world, many noble gifts; but no blessing is richer than that which He bestows in a mother who has learned love's lessons well, and has realized something of the meaning of her sacred calling."
~ J.R. Miller, Excerpt from The Family 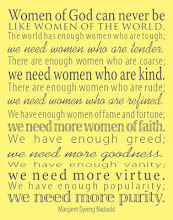 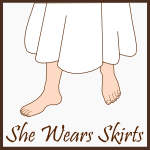 Every true wife makes her

husband’s interests her own.

While he lives for her, carrying

her image in his heart and toiling

for her all the days, she thinks

only of what will do him good.

When burdens press upon him

she tries to lighten them by

sympathy, by cheer, by the

inspiration of love. She enters

with zest and enthusiasm into

all his plans. She is never a

weight to drag him down, she is

his strength in his heart to

help him ever to do nobler

When a woman veils her body in modest clothing, she is not hiding herself from men. On the contrary, she is revealing her dignity to them. ~ Unknown

I've Been Featured At:

A woman's heart should be so hidden in God that a man would have to seek Him first to find her.

The Bible calls debt a curse and children a blessing, but in our culture we apply for a curse and reject the blessing!!!

Sites that inspire and encourage me

If you admire our faith,

If you admire our sense of commitment,

If you admire our community spirit,

If you admire the simple life,

If you admire deep character